The Academy of Finland’s September 2020 call for applications resulted in funding for 211 Academy Projects consisting of a total of 265 subprojects. Additionally, the Academy granted for 67 research posts as Academy Research Fellow, 107 posts as Postdoctoral Researcher and ten posts as Clinical Researcher. The level of applications was very high: in the peer review by international panels, 38% of all applications reached the top of the scale with rating 5 or 6. The overall application success rate was 14%, and the Academy’s research councils distributed a total of 173,2 million euros in funding across their respective scientific disciplines. Women accounted for 40% of the funding recipients.

Riitta Maijala, Vice President for Research, said: “The high percentage of top-rated applications that did not get funded shows the high level of Finnish research at present and how fierce the competition for funding is. It’s a pity if the budget authority of the Academy will be permanently cut, because it will mean that an increasing percentage of first-rate applications will be left without funding.”

Academy Project funding is the Academy’s main funding opportunity. It promotes the quality, impact and renewal of research and is a fully bottom-up scheme where researchers can freely choose their topics. The Academy Project funding scheme receives the highest number of applications each year. In the review, both the scientific and the social impact of the applications was estimated to be high. These, together with scientific renewal, were among the Academy’s most important funding criteria.

The total number of applicants increased slightly from the previous year. The popularity of the Academy’s calls for applications is relatively well established, and there has been little variation in applicant numbers in the last two years. Almost half of the applicants and recipients of Postdoctoral Researcher funding were women. In the Academy Research Fellow and Academy Project funding schemes, the proportion of men among the funding recipients was significantly higher.

The applications were peer-reviewed by international panels, all of which were held remotely due to the Covid-19 pandemic. The review of the applications received in response to the September 2020 call was trusted to 70 panels consisting of a total of 631 reviewers. Additionally, 91 independent experts contributed to the panel review.

The panels ranked the applications, taking into account the scientific quality and novelty value of the proposals as well as the objectives for each funding instrument. Proposals for new Academy Projects were ranked based on the scientific quality and innovativeness of the research plan. The applications for funding for research posts were also ranked according to the applicant’s personal competence.

In their feedback, the panels commented on the Academy’s review process and, in particular, on how the online panel meetings had affected the quality of the review. Most of the panellists did not think that the online meetings had influenced the quality of the review, and the Academy’s review process was generally considered to be at a very high level, despite the exceptional arrangements. 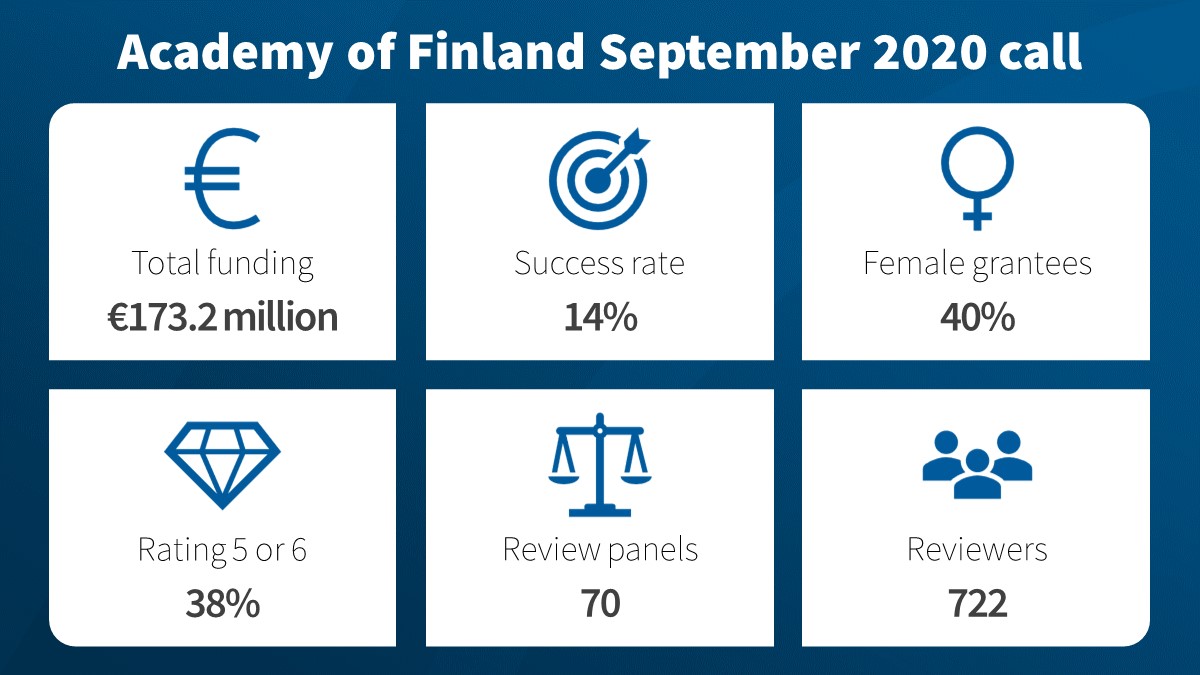