The Academy of Finland has made the decisions on the latest round of PROFI funding, aimed at strengthening the research profiles of Finnish universities. The funding supports the universities in developing research field portfolios based on their strategies and reinforcing the preconditions for high-quality research. The Academy funding expedites the universities’ development.

This was the fifth round of PROFI funding. The total amount applied for was 103 million euros. The Academy’s funding for the projects amounts to 50 million euros. While applying for funding, the universities present concrete plans on developing the preconditions for  research quality and impact within their chosen profiling areas. The description of the research profiling collaboration and the division of work between universities and other organisations is an important part of the application.

Eleven of the thirteen universities that applied were granted funding. The funding, granted for four years, varies between 500 000 euros and 14,7 million euros. The funding decisions are based on the review report by an expert panel, application ranking by the panel, the applied funding in relation to the planned profiling and the university’s research funding, as well as the universities’ progress reports on their previously funded project 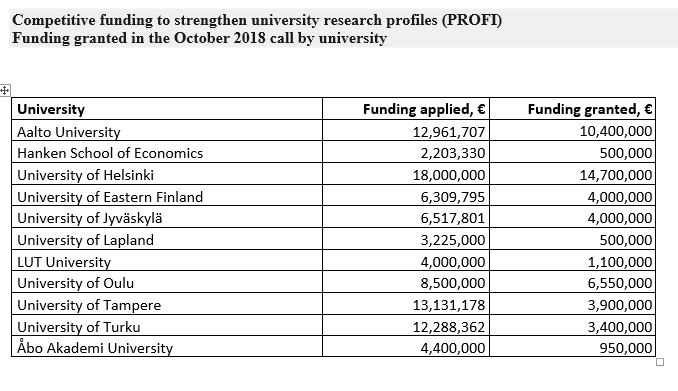 The universities applied for funding for a total of 32 profiling areas. A majority of these (23) related to previously chosen profiling areas. The plans included advancing the development of these research fields.

The applications indicated plans to use the funding mainly on researcher salaries. The plans also presented a multitude of measures for internationalisation, different platforms to promote interdisciplinary collaboration, development of local research infrastructures, advancing national and international collaboration, as well as developing connections to the business sector and the society.

A panel of international experts reviewed the applications. The panel consisted of leading experts (rectors, vice rectors, etc.) from European universities with wide and versatile experience of university reforms in support of research. The panel found the applications to be of high quality.