There have been partial overlaps in the Academy of Finland’s funding for early-career Academy Projects, research posts as Postdoctoral Researcher and research posts as Academy Research Fellow. Applicants have sometimes found it difficult to choose the scheme from which to apply. The different cost models for Academy Research Fellow salaries and research costs have also been burdensome in administrative terms. Our aim is to simplify the Academy’s funding portfolio and the funding application process, to allow greater flexibility in funding uses during the funding period and to ease the administrative burden on individual researchers, research organisations and the Academy.

Reform based on extensive examination

In 2021, the Academy launched a project to examine different ways of developing the funding opportunities available to early-career researchers. The project showed that the range of funding schemes for early-career researchers has become more complex in recent years and that the Academy Project funding targeted at early-career researchers in particular has been perceived as vague. In addition, the feedback collected during the project highlighted that the funding should be flexible in terms of the career stage, the nature of the research field and the applicant’s situation and available to be used for the applicant’s own salary, for research costs, or both. There were also comments that the Academy should abolish the mobility requirement, as it is subject to interpretations, and link its objectives better to the application review.

Based on feedback received from researchers, their main concerns have been related to the low success rate of applications. Ever tougher competition leads to a low success rate, which the Academy Board also sees as causing many kinds of problems both in terms of the work to be done by the actors involved and in terms of the allocation of funding. For this reason, too, it is important for the Academy to revise and refine its science policy objectives in the funding of early-career researchers.

The science policy objective behind the reform is to identify and support the most promising early-career researchers so that during their funding period, they can make significant career progress towards more demanding research positions. In the light of this objective, it is important to define the eligibility in such a way that the Academy can through peer review identify those applicants who can achieve the desired significant career progress during the funding period.

According to the plan, applications for Academy Research Fellowships may be submitted by researchers who have completed their first doctorate at least two years but no more than seven years ago. At that stage, applicants will already have conducted postdoctoral research and made conscious choices to advance their research career, but as a rule will not yet have reached the career stage necessary to be eligible for a position as principal investigator of an Academy Project.

Unfortunately, having eligibility cut-off points always excludes some applicants from applying. The present plan can be seen as a necessary compromise that takes account of a wide range of wishes and objectives. The idea behind targeting the Academy Research Fellowships call at a rather closely defined group of applicants is to maximise the chances of achieving the science policy objectives set for the funding scheme and to gain maximum impact.

After all, it is particularly important that talented researchers who have recently obtained their doctoral degree and are aiming at a professional research career have the opportunity to collect the necessary merits required to be able to apply for an Academy Research Fellowship. Already now, researchers at the postdoctoral stage more often work in projects funded by the Academy than with their own postdoc funding. The Academy will continue to engage in close dialogue with research organisations in order to continue to offer diverse opportunities for gaining the necessary qualifications.

Mobility requirement to be removed

According to feedback the Academy has received, researchers have found the mobility requirement, which has been an eligibility requirement in Postdoctoral Researcher and Academy Research Fellow funding, challenging and nowadays difficult to fulfil. Researchers consider the appropriate fulfilment of the mobility requirement particularly challenging from the perspective of, for example, the needs of family or other private life. The Academy is committed to supporting the reconciliation of work and family life in all funding opportunities as part of the promotion of equality and nondiscrimination in research funding. Although changing working environments as a form of physical researcher mobility is often still a key part of a successful research career, fruitful collaboration can nowadays also be carried out in other ways.

Based on the feedback we have received from researchers and the information obtained from applications, it is therefore justified to abandon the mobility requirement as such. This change is part of the allocation of funding through eligibility. While the Academy currently uses the mobility requirement to ensure the growing independence of researchers and the development of their diverse skills and competencies, in the future similar evidence will be required from the applicant already at the application stage. However, this evidence does not necessarily have to be mobility, as the researcher’s career progress will be assessed more broadly.

When applying for the new Academy Research Fellowships, the applicants are expected to have sufficient evidence in relation to the career stage that they have purposefully started to move ahead in their professional research career. How this progress is made varies from one research field and situation to another. The different professional competence areas of researchers have diversified, and a person may embark on a professional research career in a variety of ways. In the implementation plan for the funding reform, we illustrate some ways of demonstrating career progress, but we need the support of the research community in order to develop the review of applications to effectively take into account the range of situations in different fields of research and the ways in which research is conducted. We therefore hope that researchers will actively participate in the consultations.

A major focus in the review of applications is to evaluate the scientific quality of the research plan and the applicant’s competence, and this is not based on quantitative indicators but on qualitative international peer review. The evaluation of the researcher will continue under the principles of responsible assessment that are used in all funding activities of the Academy. Carrying out a responsible review that takes into account the diversity of merits allows us to ensure an equal treatment of applicants, identify the most talented applicants and thereby strengthen the impact of our funding.

More flexibility in funding use

In the current Academy Research Fellow model, funding for salary and research costs is applied for separately, because there are two different cost models in place. Although an Academy Research Fellow funded through a separate application has been able to apply for a change in funding purpose, this has been arduous for both the researcher and the administration at the research organisation. One of the purposes of the reform is to move to one single cost model and to make a single funding decision for the entire funding period. The funding can be used flexibly for the researcher’s salary and research costs, and changes to the cost items presented in the application’s cost estimate can easily be made within the limits of the funding terms.

The Academy considers it important to take account of the specificities of different fields of research as part of the reform. This is why the new funding scheme is intended to be as flexible as possible in terms of both the structure of the cost estimate and the conditions for the funding use.

In autumn 2021, we asked researchers, managers and administrators at research organisations and foundations and organisations what they thought were the most important aspects of the funding of early-career researchers. We then also organised discussions where we continued to analyse the feedback from stakeholders.

Our survey for researchers attracted 828 respondents. The respondents thought the most important features of a funding scheme for early-career researchers were the opportunity to use funds for the payment of the applicant’s salary; having a long enough funding period; and having a reasonable success rate. On the other hand, international mobility was clearly considered less important. Women in particular appreciated the possibility of using funding for their own salaries and, on the other hand, good conditions for combining research and family life.

In addition, the researchers wanted flexibility first and foremost. For example, the strict definitions of the mobility requirement raised concerns, especially among researchers with families. Researchers also called for a possibility to use the funding more flexibly for their own research needs. 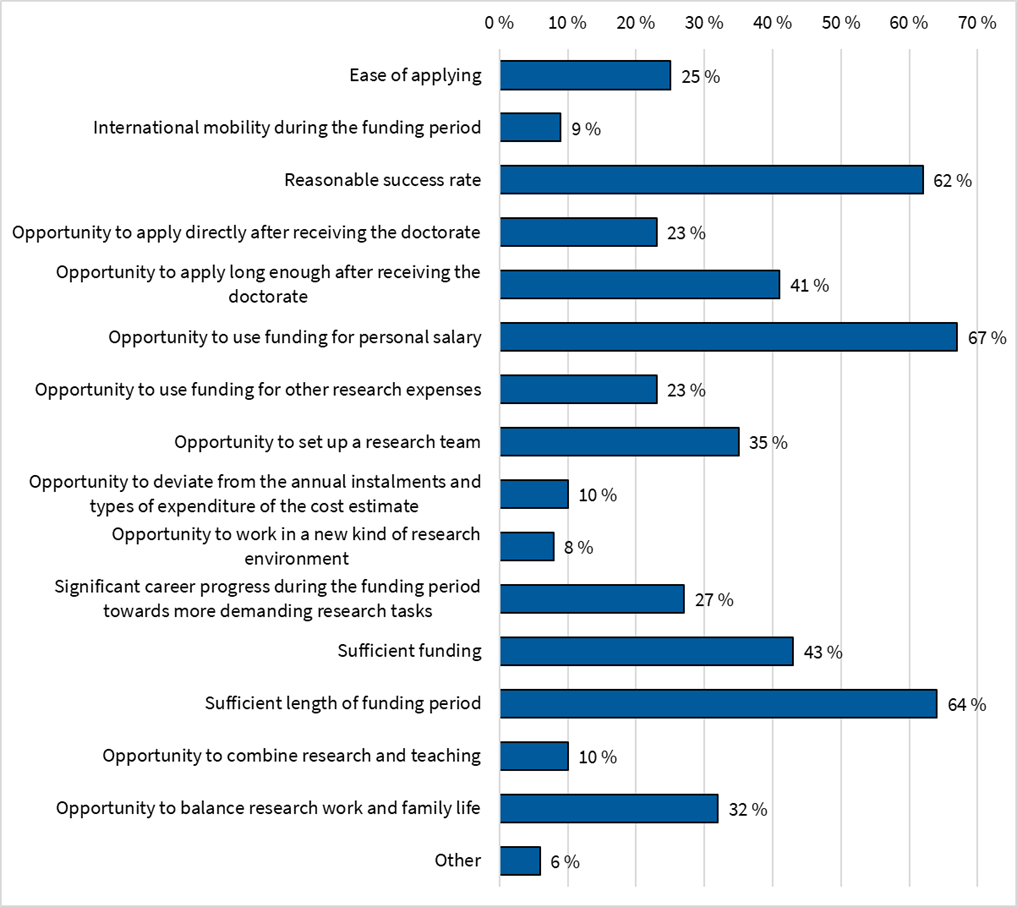 View the report on the survey for researchers (PDF, Charts and questionnare in English)

The reform is scheduled to enter into force with the September 2022 call for applications.

Why is the Academy Research Fellow reform being carried out, and what is the aim of the new funding scheme? Watch our video where Johanna Myllyharju, Chair of the Academy Board, talks about the reform: