During its three-year term, the Research Council for Culture and Society has emphasised impact more than before as an element of scientific quality. Impact is not a separate concept from quality, but quality of research in itself. These criteria of high-quality research cannot be strictly separated from each other.

The Academy of Finland’s Research Council for Culture and Society has continued to draw attention to the diversity of the fields of research it represents: The manifestations of quality, impact and renewal as well as the criteria may vary from one field to another, and publication practices, for example, still vary significantly in the fields the Research Council represents. Although more social sciences and humanities research is carried out in research groups, the role of individual researchers is still important, especially within classical humanities.

The research funding of the Research Council for Culture and Society is researcher-oriented (bottom-up), which means it is based on research ideas proposed by the applicants themselves. The Research Council receives approximately 1,000 applications for research funding each year, of which around 150 are funded. The funding criteria are the quality, impact and renewal of the research. However, the value of scientific knowledge and the quality and impact of research should not be assessed based on overly unilateral criteria or external criteria of research. In the light of the information provided by the final reports of the funded projects, it is therefore appropriate to continue the discussion on which research funding instruments best implement the overall aim of promoting science.

The results of the research projects are monitored through reports submitted to the Academy by the principal investigators after the projects have ended. The reports submitted by researchers are an important source of statistical information. Based on the reports, the Research Council can assess, for example, which funding schemes produce the most publications or other significant outputs such as research data, international visits and collaborations between researchers, or the reported societal impact of the research. The reports can also be used to highlight aspects of Academy funding.

The 116 reports of projects completed in 2020 show, for instance, that a total of 2,200 publications were produced. Thus, on average, slightly less than twenty articles or other publications were published in each project. In addition, the reports show that many monographs are still being published in the social sciences and humanities and that their significance as a scientific output is not disappearing.

In addition to publications and other outputs, the Research Council for Culture and Society examined in the report overview of 2021 the international context of the projects it had funded and the societal impact reported by the projects.

When examining the reports, it can be noted that research in the concerned fields is very international and that the international dimension stems from the internal scientific starting points of the projects.

Three out of four projects completed in 2020 included at least two international partners. At least five partners participated in every third project.

The Research Council has a great deal of institutional cooperation with research funders, especially with European and Nordic organisations of similar purpose such as Humanities in the European Research Area (HERA) and New Opportunities for Research Funding Agency Cooperation in Europe (NORFACE).

Figure 1. Finnish researchers in the social sciences and humanities work most together with countries with which Finland has close cultural links. These include the main Anglo-Saxon countries, the Nordic countries and our other neighbours. 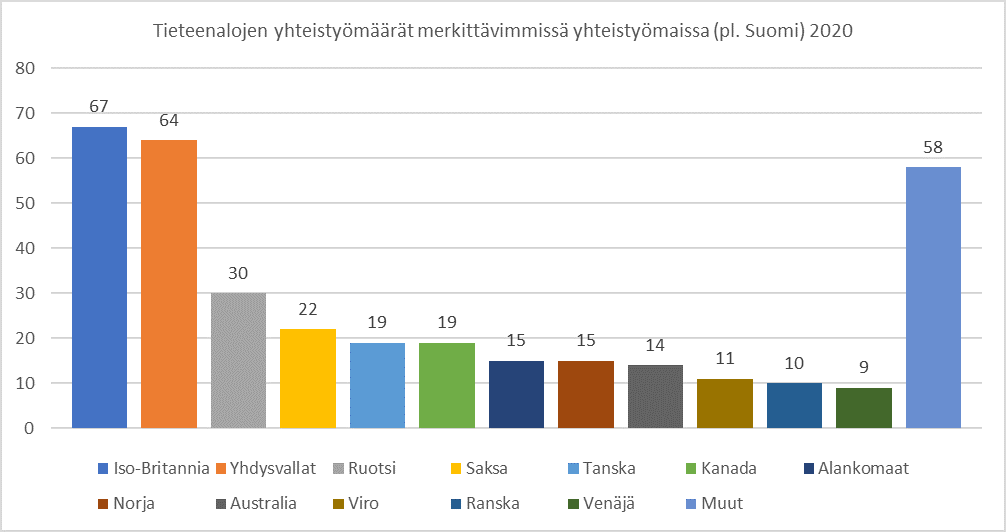 In SSH research, impact must be understood broadly and over the long term

The impact of research includes both scientific and broader societal impact. Scientific impact is realised, for example, through scientific publications and support for new generations of researchers.

In the reports, societal impact is divided into impact on worldview, culture and human understanding, public services and the functioning of society, economy and business life, health and wellbeing, environment and natural resources, as well as other kinds of impact. Most researchers reported that their projects had had an impact in several categories.

However, the experience of the Research Council shows that it is often difficult to define the ‘impact type’ in reports. It is always easier for researchers to verify limited and immediate impact than extensive and long-term effects.

Figure 2. Mentions of the different areas of societal impact of research reported by researchers in the social sciences and humanities by funding instrument for funding that ended in 2020. 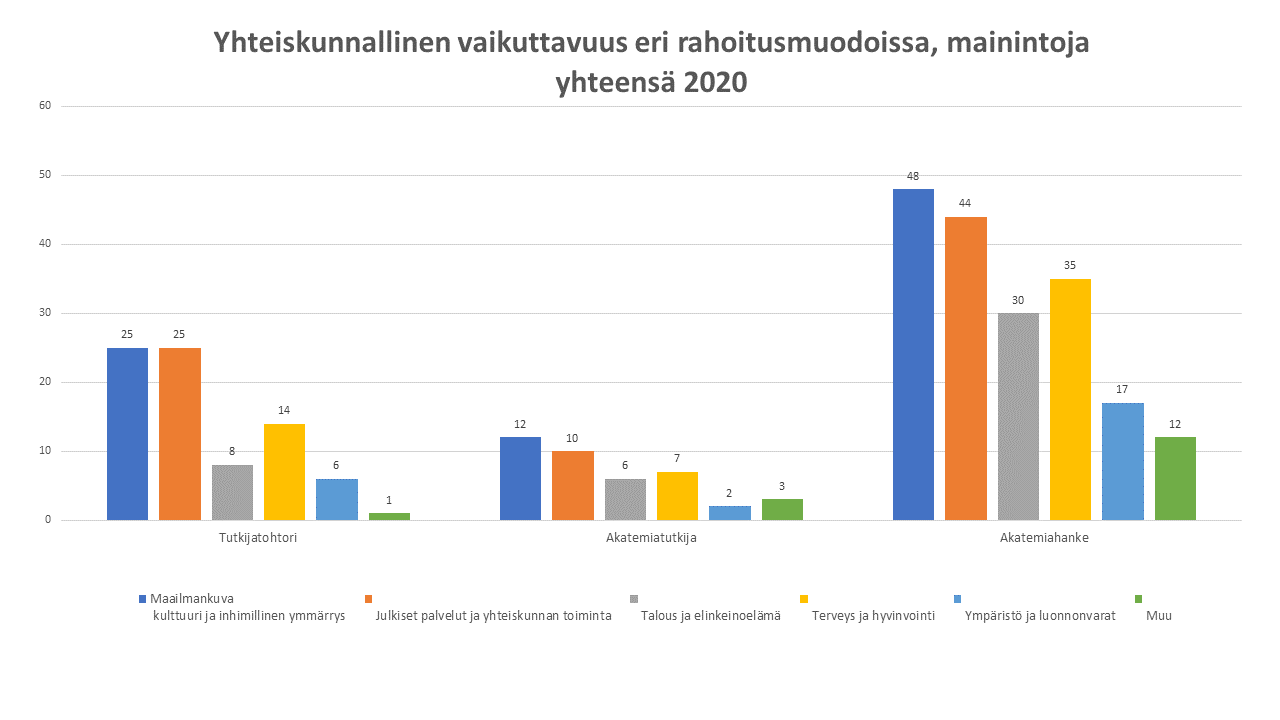 The impact of research is diverse

It is important to remember that the most tangible impact of research will be on society as a whole, through education. Experts working as teachers, specialists, policymakers, product developers and other professionals in society have received research-based education also from researchers funded by the Academy of Finland. This impact is the most important condition for the functioning and development of society.

Project reports show that research data from social sciences and humanities research projects is widely used in society. In addition, the impact of the research results is very diverse.

The impact on worldview, culture and human understanding has remained steady as the most reported type of societal impact of projects. 86 per cent of the projects reported that their research had this type of impact.

Four out of five projects also mentioned the impact of research on public services and the functioning of society in their reports this year. As an example, the Academy project led by Janne Pietarinen (University of Eastern Finland) reported on impact, which developed two new indicators for schools: Teachers’ learning and socio-contextual work fatigue, and pupils’ learning, adherence to school and wellbeing at school. The aforementioned indicators are openly available, and the results of the research provide information on the coping of school communities and the development of practices that promote and support wellbeing. The development of the indicators has also been reported to both the Finnish National Agency for Education and the Ministry of Education, Science and Culture.

Impact on health and wellbeing was reported in, for example, Noora Hirvonen’s (University of Oulu) research project. The project examined people’s ways of making choices related to HPV (papilloma virus) vaccinations. Hirvonen describes vaccination decisions as shared decisions with various actors and different sources of information at the background. The results of the research project indicate the tensions between the status of those taking part in the decision-making (young people, parents and health authorities) and the cognitive authorities (individual, experiential, institutional and biomedical). Hirvonen’s research results can be utilised, for example, in the planning of communication and guidance related to HPV vaccinations. In addition, the research may increase understanding of factors affecting vaccination decisions and, more generally, health choices.

Every other project reported in 2021 also mentions the impact on economy and business life. The research “Kyvyt ja menestys liike-elämässä” (talent and success in business life) led by Matti Keloharju (Aalto University) analysed the relationship between talent and success as well as career progress in business life. The research focused on the characteristics of people that anticipate an appointment as CEO. According to Keloharju’s study, the most prominent predictor of a CEO’s appointment is the degree of commitment to the labour market, which is influenced by such factors as contract breaks, periods of unemployment and absences from work. The results of the research have been widely discussed in international media, and they have been presented to the business sector and business leaders.