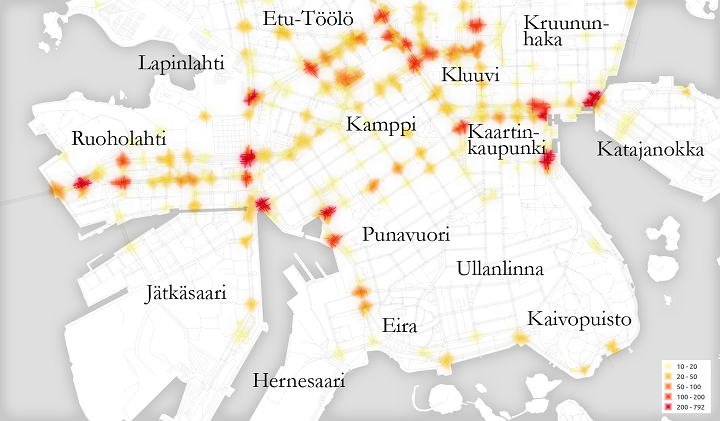 Number of stops made by bicyclists close to intersections in central Helsinki. The map is based on cycling trips recorded during the years 2010 to 2012 that cyclists uploaded to the mobile fitness application Sports Tracker. Only activities that the users set "public" are taken into account. Any halt that lasted between 10 and 180 seconds is considered as a stop. Picture: Anna Brauer ja Juha Oksanen.

Opened on May 8 2019, the goal of Geoportti is to expand the use of spatial data across different research fields.

“We have only scratched the surface of scientific research on spatial data and the benefits of its analysis, not to mention what we can get out of using the high-performance computing environment”, says Juha Oksanen, head of department at the Finnish Geospatial Research Institute of the National Land Survey of Finland.

The volume of open access spatial data has increased exponentially. What is more, the availability and accessibility of data have also improved notably over the past ten years.

“It is important that spatial data can also be used by those who are not professionals in geoinformatics. This is why we will add various instructions and training material to Geoportti”, Oksanen says.

Research institutions on par with universities

Providing research institutions belonging to the Open Geospatial Information Infrastructure for Research (oGIIR) consortium with easy access to the computing resources of CSC is ground-breaking. Universities have already had similar access for several years.

The Geoportti.fi site was built by the oGIIR consortium. Its members include a large group of research institutions and universities. The goal of the oGIIR project was to build a user-friendly site based on open access to support the Finnish scientific community and boost research on geographical information science and disciplines gaining benefit of using geospatial data.

“The site’s target group not only consists of researchers of geoinformatics, but the goal was also to expand the use of spatial data to other research fields. What makes this project a particularly significant one is that it spans across university and research institution boundaries”, Oksanen says.

The oGIIR project is funded by the Academy of Finland and the consortium’s member organisations.