Researchers at the Nanoscience Center and Faculty of Information Technology in the University of Jyväskylä, Finland, have achieved a significant step forward in predicting atomic structures of hybrid nanoparticles. A research article published in Nature Communications on 3 September 2019, demonstrates a new algorithm that ”learns” to predict binding sites of molecules at the metal-molecule interface of hybrid nanoparticles by using already published experimental structural information on nanoparticle reference systems. The algorithm can in principle be applied to any nanometre-size structure consisting of metals and molecules provided that some structural information already exists on the corresponding systems. The research was funded by the AIPSE research programme of the Academy of Finland (Novel Applications of Artificial Intelligence in Physical Sciences and Engineering Research).

Nanometre-sized hybrid metal nanoparticles have many applications in different processes, including catalysis, nanoelectronics, nanomedicine and biological imaging. Often it is important to know the detailed atomic structure of the particle in order to understand its functionality. The particles consist of a metal core and a protecting layer of molecules. High-resolution electron microscopes are able to produce 3D atomic structures of the metal core, but these instruments cannot detect the molecular layer that consists of light atoms such as carbon, nitrogen and oxygen. The new algorithm published by the researchers in Jyväskylä helps to create accurate atomic models of the particles’ total structure enabling simulations of the metal-molecule interface as well as of the surface of the molecular layer and its interactions with the environment. The algorithm can also rank the predicted atomic structural models based on how well the models reproduce measured properties of other particles of similar size and type.

”The basic idea behind our algorithm is very simple. Chemical bonds between atoms are always discrete, having well-defined bond angles and bond distances. Therefore, every nanoparticle structure known from experiments, where the positions of all atoms are resolved accurately, tells something essential about the chemistry of the metal-molecule interface. The interesting question regarding applications of artificial intelligence for structural predictions is: how many of these already known structures we need to know so that predictions for new, yet unknown particles become reliable? It looks like we only need a few dozen of known structures, comments the lead author of the article, Sami Malola, who works as a University Researcher at the Nanoscience Center of the University of Jyväskylä. ”In the next phase of this work we will build efficient atomic interaction models for hybrid metal nanoparticles by using machine learning methods. These models will allow us to investigate several interesting and important topics such as particle-particle reactions and the nanoparticles’ ability to function as delivery vehicles for small drug molecules”, says Academy Professor Hannu Häkkinen, who led the study.

Häkkinen’s collaborator, professor Tommi Kärkkäinen from the Faculty of Information Science in the University of Jyväskylä continues: ”This is a significant step forward within the context of new interdisciplinary collaboration in our university. Applying artificial intelligence to challenging topics in nanoscience, such as structural predictions for new nanomaterials, will surely lead to new breakthroughs.” 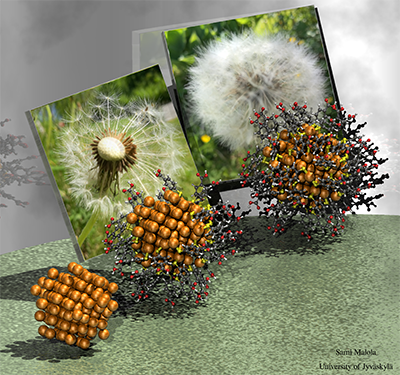 Predicting atomic structures of hybrid metal nanoparticles is, in principle, a similar problem to completing the floret shell of a ”blown-out” dandelion. What are the optimal sites to add molecules (grey) on top of a metal core (in this case gold, orange spheres)? (Visualization: Sami Malola, University of Jyväskylä)