Reduction of the carbon emissions and greenhouse gases is the future and one of the best ways to do this is to increase the amount of renewable energy sources. After successfully defending my PhD in the field of nuclear waste disposal, I started working in Rock Mechanics team at Aalto University School of Engineering in Solar Community Concept Academy of Finland project. First thing I learned was that Finland has almost the same amount of solar radiation as for Central Europe, however energy is spread throughout the year very differently. During the Finnish winter months, everyone is depressed including the sun and we enjoy only low amounts of solar radiation. However during the Finnish summer, the sun merely sets down and we enjoy plenty of sun. Now in the spring you can already see the lengthening of the day as happiness and energy from everyone you meet.

One of the things I learned during my years in the nuclear waste industry, was that allegedly the solar power would never be successful because sometimes it shines a lot and sometimes you don’t get your food warm because it is not shining. However the trick is to store solar energy during the summer to use it during the winter. This also applies to daily fluctuations. Storing the electricity produced by the photoelectric cells is not nearly efficient enough and the better way, or a good start at least, is to store the thermal energy used for space heating and domestic hot water heating. In Drake landing community in Canada, at similar latitudes as we are located, this was done successfully achieving almost 98% solar fraction. In Drake landing community and in one of the options that Aalto University Rock Mechanics team is currently considering, a borehole storage is used to store the energy. The project team consists of author, prof. Mikael Rinne, students Mateusz Janiszewski, doctoral student Lauri Uotinen and thesis students that occasionally help with different topics. 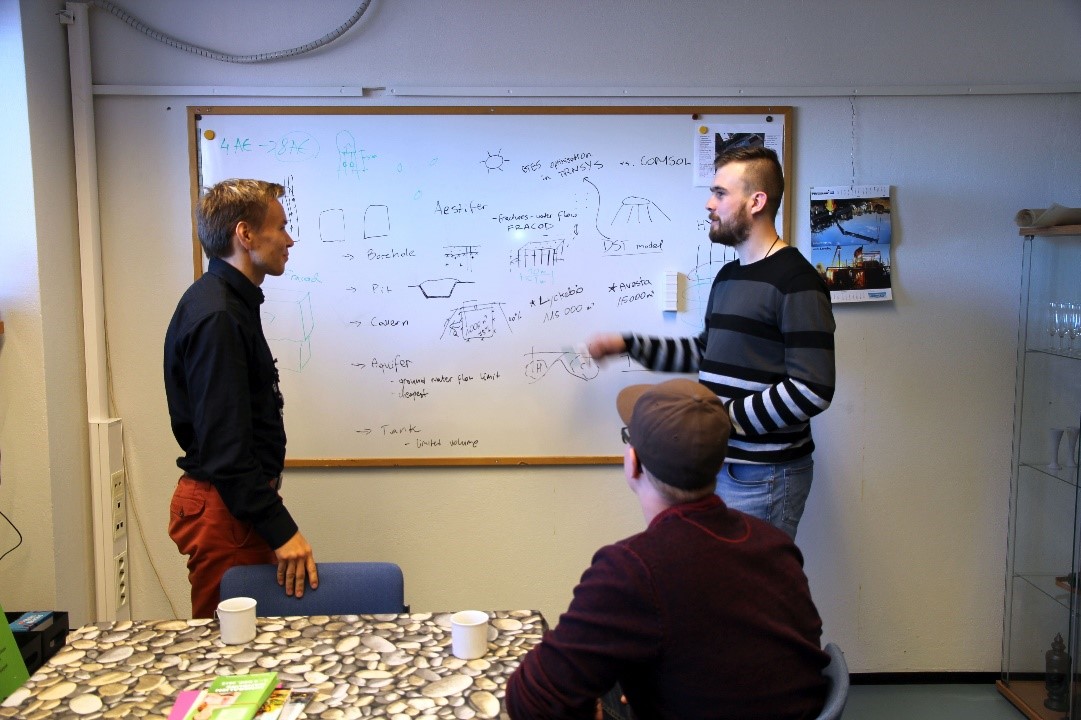 There are plenty of options for storing the thermal energy to the ground. Assessing the usability of different options for the SCC project was the first we dug in to. The SCC project considers a solar village scale of few tens or hundreds of houses. After the evaluation the borehole storage was seen as the most suitable system for the project. However to keep us researchers excited and to increase the storage efficiency, the hybrid storage options were considered as the most interesting option. Luckily the Finnish Innovation Fund Sitra funded a project in Kerava in the 80s where a hybrid storage was constructed to help power community of 44 houses. The hybrid storage consisted of a rather small pit water energy storage and borehole field around it to recover escaping heat to compensate the heat losses from the water energy storage. The Kerava Solar Village project was advanced project for the time and suffered its advanced however immature heat pump technology. Heat pumps at that time were rather new technology and proved to be unreliable in the project. We now know that the only 1500 m3 water tank was way too small to get the project economical and it was pity that the heat pumps failed, but in overall the concept was brilliant and taught us a lot.

Now 30 years later, we are now reassessing the Kerava Solar Village heat storage to calibrate and optimize our models for larger size that would be besides being of research interest also economical interest. We are also calculating the costs of the different storage options in detail. After that we intent to test our assumptions in a small scale in situ test. With all this, although the days are getting longer, we are getting as busy and as excited of the research that we are conducting.