The increase in storage capacity enables us to create and store an ever-increasing amount of data, and apply big data to a multitude of applications. Big data refers to the capture, storage and analysis of voluminous sets of unstructured data masses with the help of advanced IT solutions.

With the thousand-fold increase in storage capacity, saving and sharing data over the internet has altered drastically over the past few years. One of the people accelerating this change is the British physicist and pioneer in spintronics Stuart Parkin, who was awarded the 2014 Millennium Technology Prize for his research. 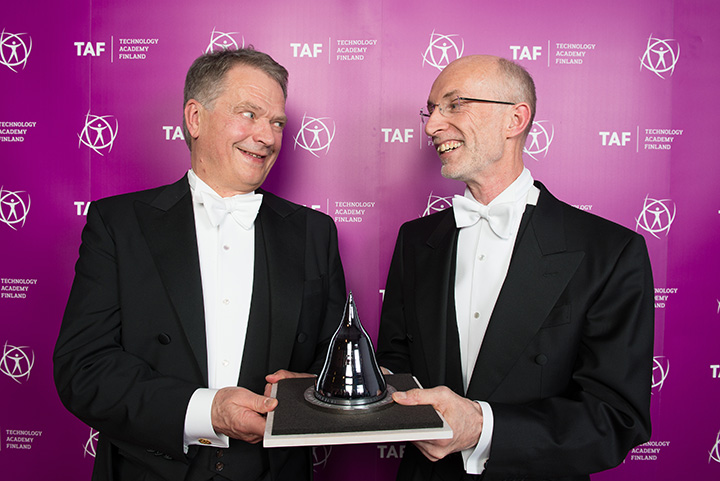 In spintronics, bits are stored based on the spin of the electron and its associated magnetic moment instead of electronic charge. Parkin’s inventions use the spin-valve read head which operates based on the giant magnetoresistance, or GMR, phenomenon. This phenomenon was discovered in 1988, and Parkin applied it to develop advanced storage technologies.

In our everyday lives, we use Parkin’s invention when we save and watch films and video clips, share large files with each other, and allow our mobile phones and various types of sensors record and store practically every detail of our lives from exercise to emotional states.

Medicine is one of the scientific fields that takes advantage of the increased storage capacity provided by spintronics. For example, a joint research project between the Universities of Turku and Helsinki and the Aalto University aims to develop models for predicting medicine-protein interaction and the growth of drug-resistant populations of microbes.

The project is led by Assistant Professor Tapio Pahikkala. Prediction is based on machine learning, a subfield of artificial intelligence, where a software programme is taught to function more efficiently by using both basic data and ongoing activity. In machine learning, the developer does not enter an algorithm separately for each function and each situation, instead, the software learns to make the desired conclusions by itself.

Results can be applied in the development of new cancer treatments

“Many of the biomedical machine learning problems contain data that can be represented as tensors which are a type of geometrical entity. Tensor-based machine learning involves the processing of complex data sets. Diseases and medications form a two-dimensional tensor. Adding patients creates yet another dimension making the tensor 3-dimensional”, Pahikkala explains.

“We are improving the complexity of methods using novel optimisation algorithms which take advantage of the tensor structure of the data. We combine these with methods to patch missing values with tensor structures, and add to them hybrid models combining active machine learning and biophysical simulations on the atomic level”, Pahikkala elaborates further.

“We are backed by a large amount of data, the calculating power of supercomputers, and a significant amount of storage space. This is sure to yield results.”

According to Pahikkala, the gained results will have a significant effect on the development of new cancer treatments, for example.

The problem of drug-protein interaction is at the heart of the effectiveness of drugs. Essentially, how a drug binds to proteins determines how a specific medicine is absorbed and spread in the body, and metabolised and eliminated by the cells.

Sisu, one of the most powerful supercomputers in Europe, is one of the services the
Finnish IT Center for Science, CSC, offers to researchers. It’s theoretical
peak performance reaches 1.7 petaflops which equals 1.7 x 10 to the power of 15
floating point operations per second. The supercomputer Sisu is used to study
the climate, astrophysics, nanotechnology, materials science, biosciences,
fusion power, and renewable sources of energy.

Careless use of antibiotics promotes drug-resistant populations of microbes

The increase in drug resistant populations of microbes is a growing threat caused by the careless use of antibiotics. For example, in the beginning of the 20th century, pulmonary tuberculosis killed annually up to 10,000 people in Finland. Thus, every hour one Finn died of pulmonary TB. With antibiotics, the disease was all but eliminated in Finland. However, drug resistant populations have become increasingly common in our neighbouring areas. In Russia and the Baltic countries, for example, incidences of drug resistant TB have been discovered. Among other efforts, we need more research that takes advantage of big data to solve the problem.

The Academy of Finland plays a significant role in the research project.

“Funding granted by the Academy of Finland enables seamless collaboration between the six parties of the consortium. Funding has been used to employ doctoral students and postdoc researchers working simultaneously in several of the organisations party to this research consortium,” Pahikkala says.

Worth one million euro, the Millennium Technology Prize is Finland’s tribute to global innovations that enhance the quality of people’s lives in a sustainable manner. The awarded technological innovations have a major societal impact and the potential to improve wellbeing on a global scale. The international Millennium Prize is next awarded on 22 May 2018.

Last modified 2 May 2018
Connect with us