Kirsi Mikkonen, Assistant Professor and Academy Research Fellow at the University of Helsinki, who has received key project funding from the Academy of Finland for her project EMPOWER, has for some time now studied spruce galactoglucomannan, i.e. spruce gum, a Finnish alternative to gum Arabic.

The costs of producing spruce gum are low, and the gum is competitive with existing hydrocolloids. Hydrocolloids are natural polymers, plant gums added to food to influence its textures. Spruce gum also has a wide range of potential applications in various products. It could be used as a stabiliser in many types of food, such as salad dressings, soft drinks, various snack products and confectionery. In addition to this, its properties would be beneficial in cosmetics as well as in various detergents, coatings, chemicals, pharmaceutical products and medicines. Stabilisers bind the ingredients of food together, improve salt- and liquid-binding capacity and thicken texture.

“They’re interesting compounds in that they’re obtained from our domestic forests; hemicellulose constitutes nearly one-third of the biomass of trees. Hemicelluloses aren’t yet exploited industrially but they have a great deal of potential, as their structure resembles the plant-based gums already in use, which are used as stabilisers in the food industry. So, the idea started from realising that a material such as this – similar types of which we import from abroad –  grows in our forests. Why not utilise this domestic natural resource, as it could be produced in forest industry processes,” Mikkonen says. 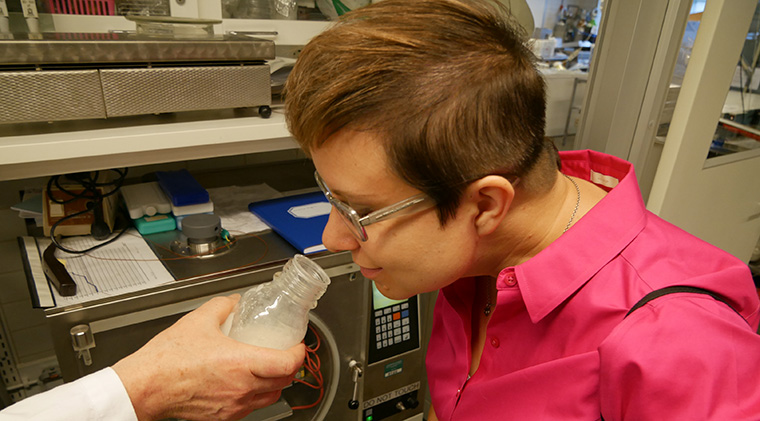 Spruce gum is more efficient than the widely used gum Arabic. Most interesting, however, is that spruce gum is multifunctional; it improves both physical and chemical stability. Because of this, it can be used to replace a number of additives, for example, in the food industry, the pharmaceutical industry and in cosmetics,” Mikkonen explains.

“The postdoctoral project funded by the Academy of Finland has produced a great deal: new projects, new research questions, different perspectives. We’ve made progress both on the application side and in understanding the mechanisms. The goal of the postdoctoral project was to understand mechanisms. We understand them better now, but this is a large subject and there still remains a great deal to be studied,” she says.

Mikkonen expresses particular appreciation for the Forging Ahead with Research key project funding: “The postdoctoral project opened numerous new avenues and the key project funding was perfect for this area. There’s a lot of competition for all these funding opportunities but, on the other hand, competition helps develop good ideas.”

Safety of new types of projects must be ascertained

The project is developing product models both for foodstuffs and for cosmetics from spruce gum.

“We’re testing real product models in cooperation with companies. We also want to disseminate results as widely as possible, for example, to potential end-users,” Mikkonen says. 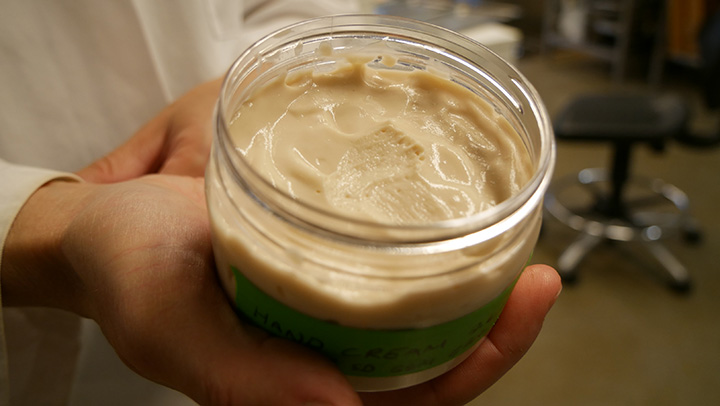 Spruce gum also has a wide range of potential applications in various products. Its properties would be beneficial in cosmetics as well as in various detergents, coatings, chemicals, pharmaceutical products and medicines.

In order for spruce gum to be used in foodstuffs or cosmetics, comprehensive safety assessments must be carried out. Finnish and EU legislation requires that the chemical composition of the products must be assessed before commercial use. If a product is a food or a cosmetic, for example, it must also be tested in cell cultures and animal testing and the possibility that it might be harmful to users must be excluded.

Cooperation with those who use the research results plays an integral role in key-project-funded projects. Advisers in Mikkonen’s project include representatives of potential producers and end-users from Fazer, Valio, Stora Enso, the pharmaceutical company Montisera and the cosmetics company Teampac, as well as academic advisers from the University of Helsinki and Åbo Akademi University. There is also cooperation with Natural Resources Institute Finland. The partners are part of the project’s steering group.

“Cooperation has gone very well and in a positive spirit. The companies have described their needs and provided information on where a new compound such as this could be used in their products. In addition, we’ve obtained raw materials from them,” Mikkonen says.

“Industry is interested in more functional, efficient and cheaper compounds, which at the same time would be safe. Spruce gum has really interesting properties, as its structure resembles existing hydrocolloids. The gum could be used to produce emulsions, in other words to break oil droplets into small droplets in water. Droplet size distribution is maintained well over time, in other words, the emulsions are physically highly stable, which is precisely the property desired for food. Spruce gum is more efficient than the widely used gum Arabic. Most interesting, however, is that spruce gum is multifunctional; it improves both physical and chemical stability. Because of this, it can be used to replace a number of additives, for example, in the food industry, the pharmaceutical industry and in cosmetics,” Mikkonen explains.

Original text in Finnish and photo by Arto Suominen

The Academy’s key project funding scheme “Forging ahead with Research” is aimed at generating greater impact from research through a targeted call. Under the scheme funding is made available primarily to early-career researchers, giving them the opportunity to conduct top-level research and to put their results to good use.

The aim of Academy key project funding is to promote active collaboration between the research field (universities and research institutes) on the one hand, and end-users of research (business and industry), on the other. Projects funded will promote the more effective use of research results through various experiments and pilots. The Academy of Finland awarded a total of 30 million euros to 101 projects.