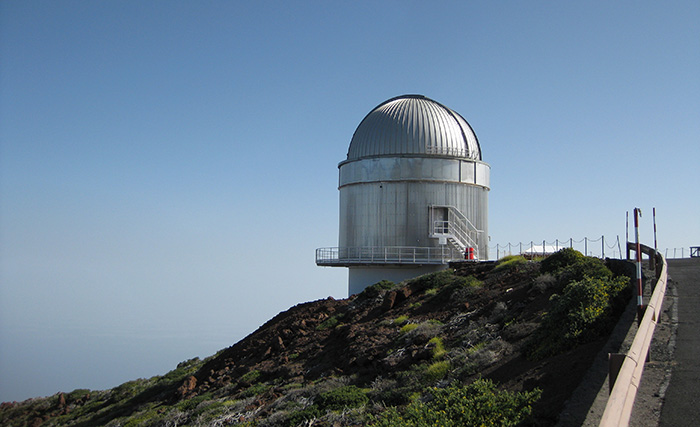 An international team led by Erkki Kankare at Queen’s University Belfast has discovered a new population of extremely bright explosions in distant galaxies. These may be the brightest supernova explosions ever observed. The group’s research is mainly based on observations carried out at the Nordic Optical Telescope (NOT), which is co-funded by the Academy of Finland.

The study concentrates on a transient event which was discovered with a telescope on Hawaii as part of an all-sky survey that aims to discover transient objects such as supernovae, which are explosions of massive stars. The host galaxy of the discovered explosion is located more than 3 billion light years from the Earth. The event appeared to be extremely interesting based on its brightness and location in the central region of its host galaxy. Kankare’s team has monitored the event for several years.

“The total energy radiated by the event is 1,000 times that of normal supernova explosions. The host galaxy of the event is also an active, so-called Seyfert galaxy, with a roughly 10-million-solar-mass, supermassive black hole in its nucleus. The spectroscopic properties, and the slow and smooth evolution of the event, showed that it wasn’t a normal outburst of a supermassive black hole in an active galaxy,” Kankare explains.

Based on the data analysis, the research group converged on two possible paths of origin for the object. Either it is one of the brightest supernova explosions ever, originating from an extremely massive stars of several tens to up to a few hundreds of solar masses, or it is a disruption of a star by the gravitational tidal forces of the supermassive black hole in the galaxy nucleus. In both cases, the observations suggest that, during the event, explosively expanding material collided with dense ambient gas.

“If this is a tidal disruption event, the observations tell us something new about the mechanism of these kinds of events,” Kankare says.

The team’s study also presents five other discovered objects with similar properties. “Future observations of new similar events will enable a better understanding of these extremely energetic events. Because of their significant brightness, these events can also be used in future as tools to probe the properties of distant galaxies,” says team member, Professor Seppo Mattila from the University of Turku.

Observations were carried out mainly with the 2.56-metre NOT on La Palma, Canary Islands, which is one of the best observatory sites in the world. The NOT has an important role both for astronomy research in Finland and in the training of a new generation of researchers. Its flexibility makes the NOT a very competitive telescope internationally and extremely well suited for observing supernovae and other transients.

The research group also includes Dr Tuomas Kangas and PhD students Jussi Harmanen and Thomas Reynolds from the Tuorla Observatory of the Department of Physics and Astronomy at the University of Turku.

The research results were published in Nature Astronomy.

Photo: NOT telescope on La Palma

The Academy of Finland is a government agency within the administrative branch of the Finnish Ministry of Education, Science and Culture. Our mission is to fund high-quality scientific research, provide expertise in science and science policy, and strengthen the position of science and research. In 2017, our funding for research amounts to 437 million euros. Part of our funds come from proceeds of Finland's national gaming company Veikkaus. In 2017, these proceeds account for 70.7 million euros of our total funding for scientific research.